The last shipyard in Stockholm

Beckholmen (Pitch island) in the middle of Stockholm is the last trace of the city’s once booming shipping industry. The small island used to be home to numerous tar boileries – one of Sweden’s primary export goods until 19th century, when Russia captured the Finnish part of Sweden leading to a serious shortage of raw materials. The industrial revolution with its steamships saved the day: a new shipyard was built here, soon joined by dry docks, large cranes and a prohibited military area. 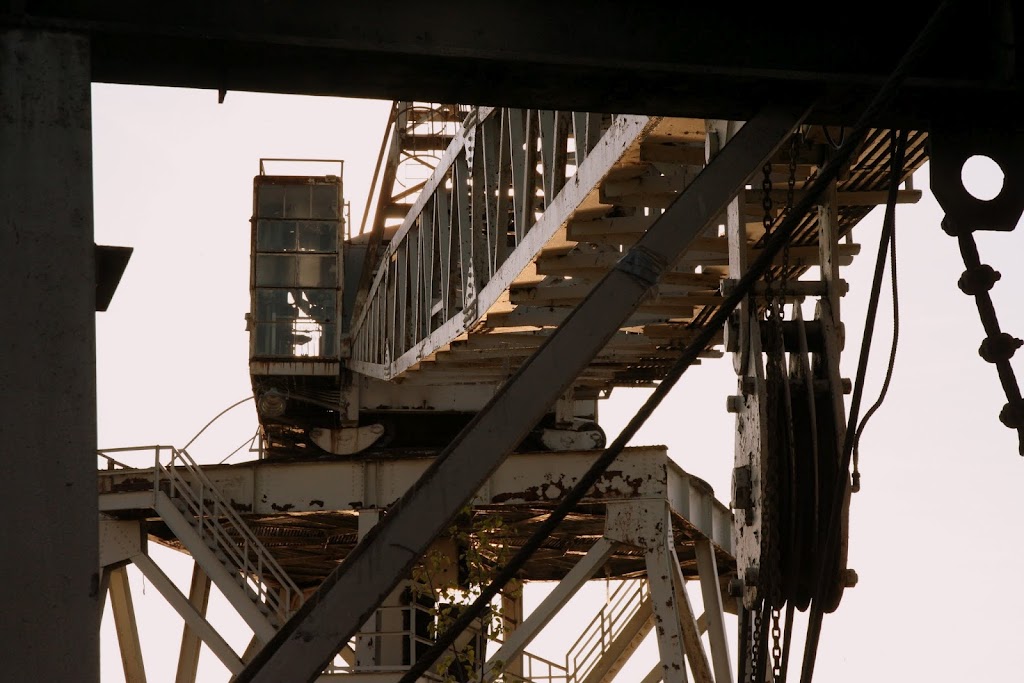 The “Washington crane” was bought from United States and primarily used by the Swedish Navy dock. It was the last one of its kind and was used to build Liberty ships during WW2. The crane was finally decommissioned and scrapped in 2011 – the photo above is one of the last ones. 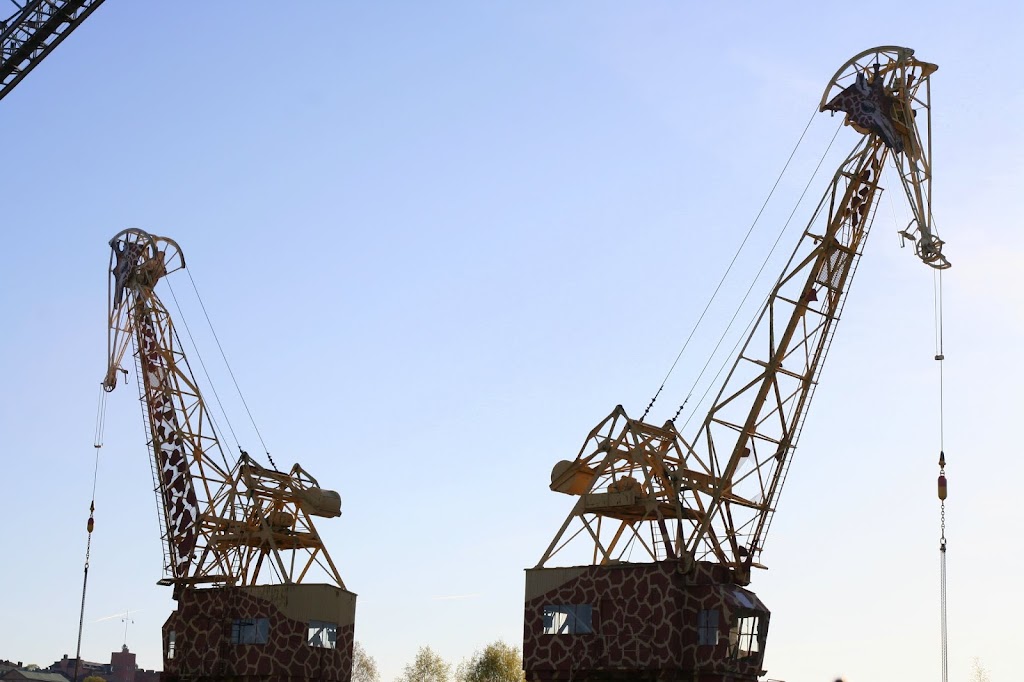 The giraffe cranes were moved here from Hammarby dock before its transformation to a residential district. They are still in use.

Industrial metal next to an old 18th century residence house. 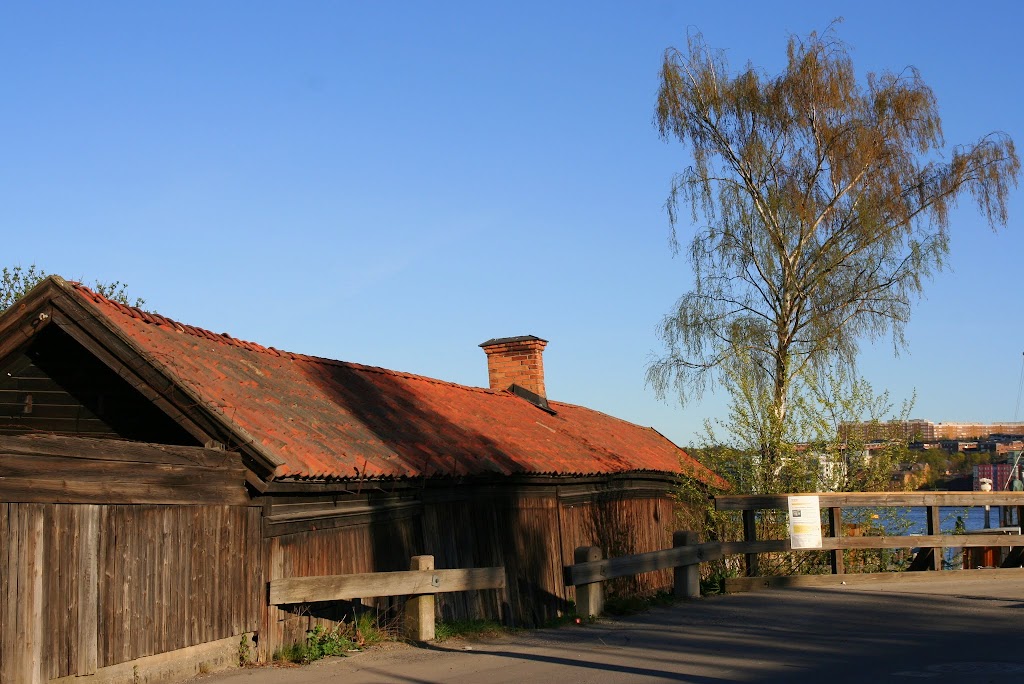 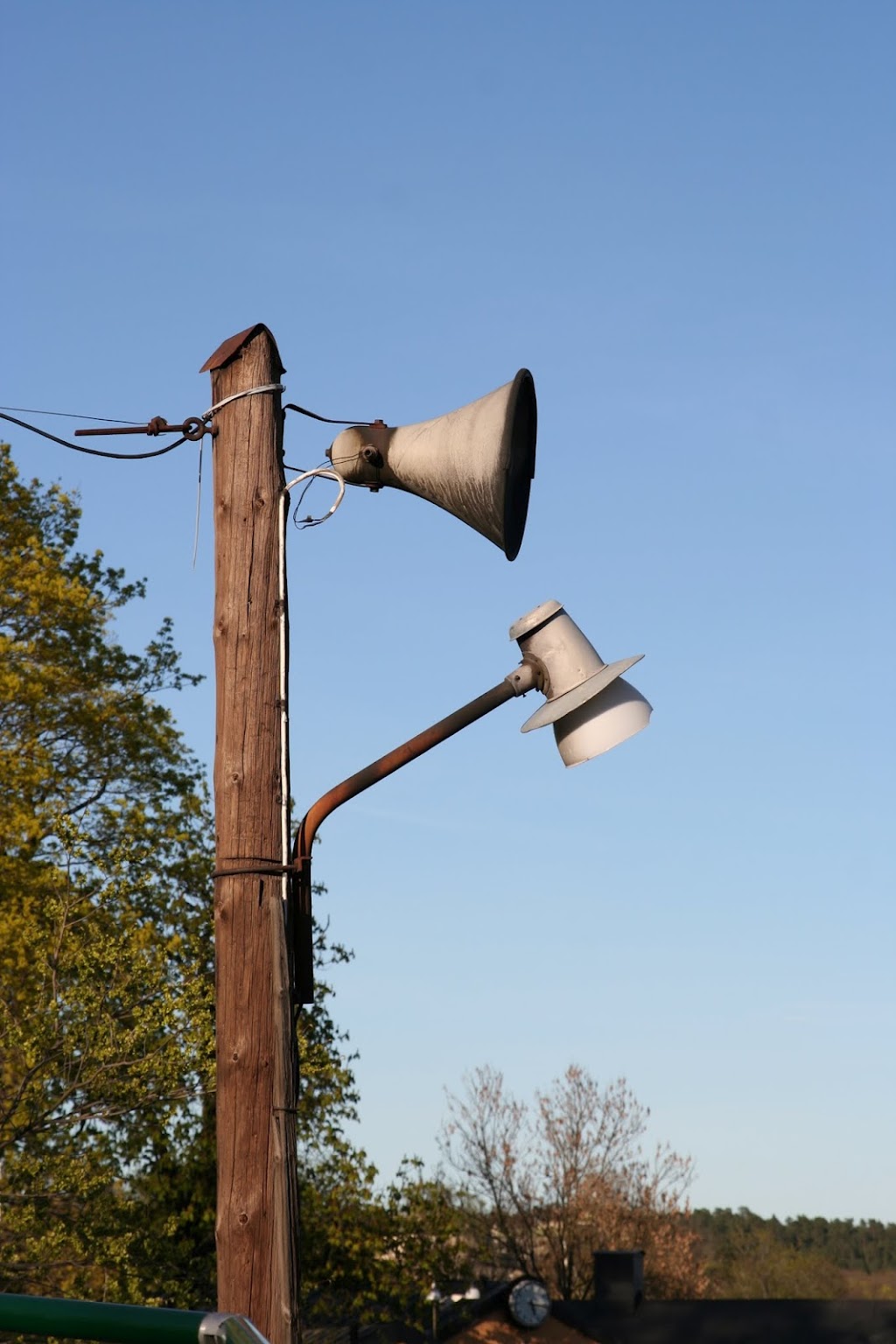 The central radio tranmission system has been quiet for a few decades. 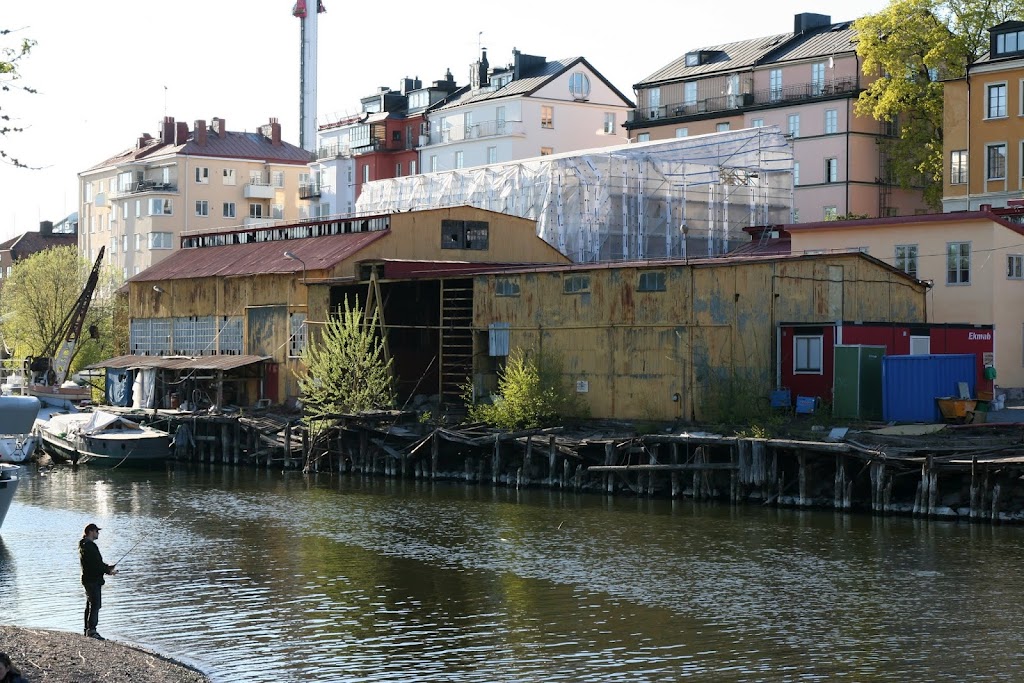 Dock workshops, with a growing residential area just behind. 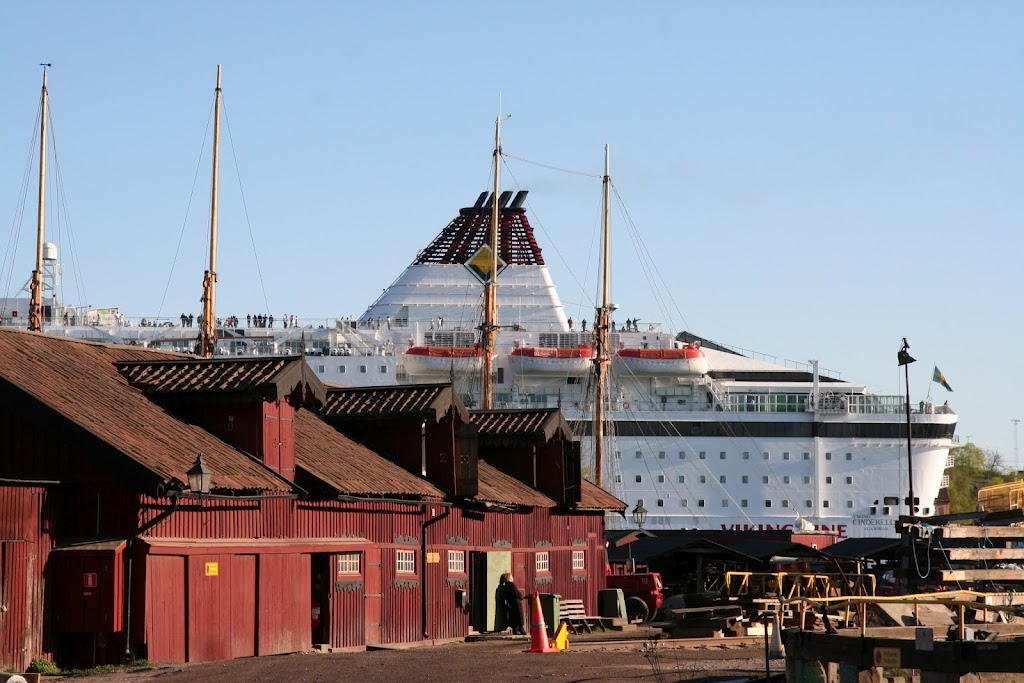 A Viking Line passenger ferry behind the old dock workshop (demolished in 2012). 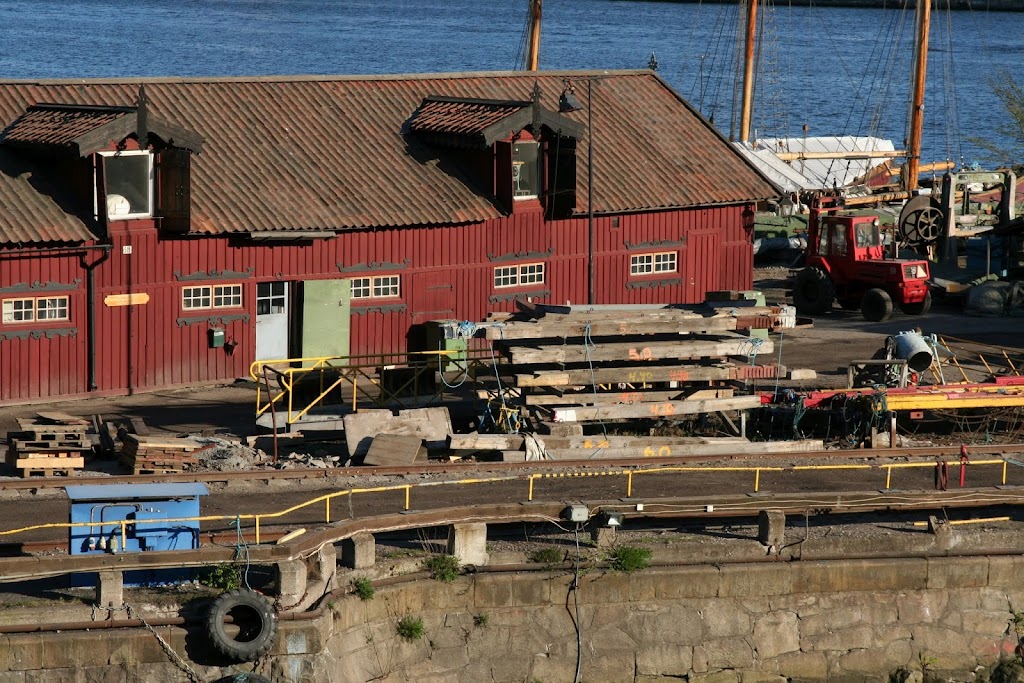 One of the two first dry docks that were built here in18th century. 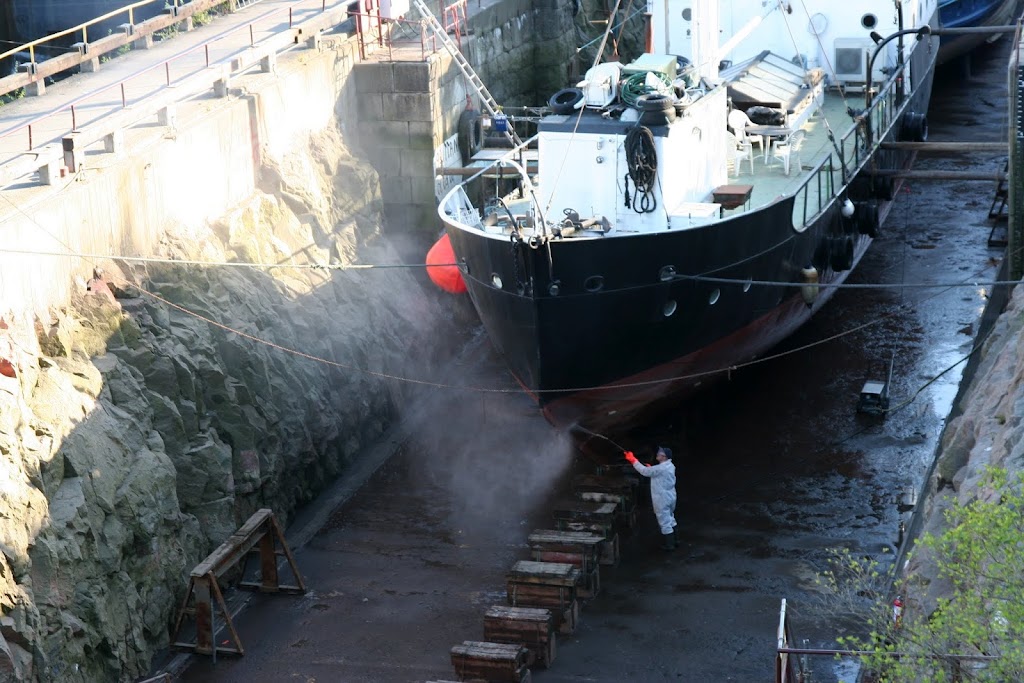 The docks are still in use, although off limits for the general public. As seen on previous photos, a lot of the buildings are being demolished. The island is located in the middle of the Swedish capital so property prices are rather steep. However, Sweden tends to enforce its environmental laws prohibiting house construction on polluted soil. Consequently (in 2012) a huge soil remediation project is takig place: many thousands tons of soil are being transported to a waste disposal plant in Löt, cleaned from the approximately 435 tons of led, 4,5 tons of arsenic and 2,4 tons of mercury – and then moved back again. The area can then be opened for visitors again. 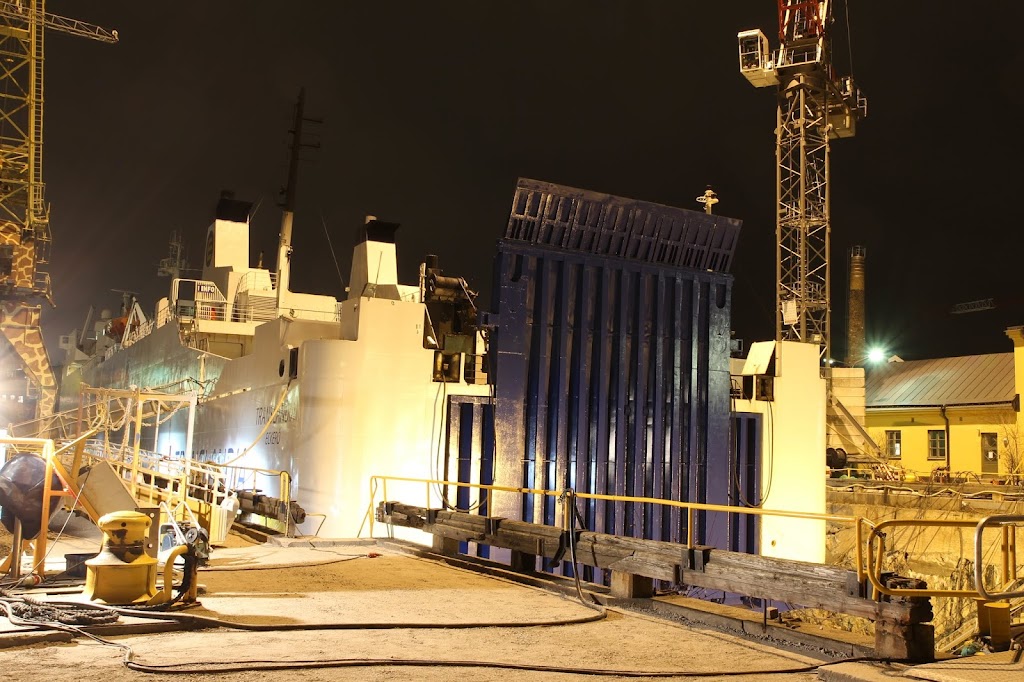 It’s fairly easy to get in, even though new gates and code locks are installed there now. 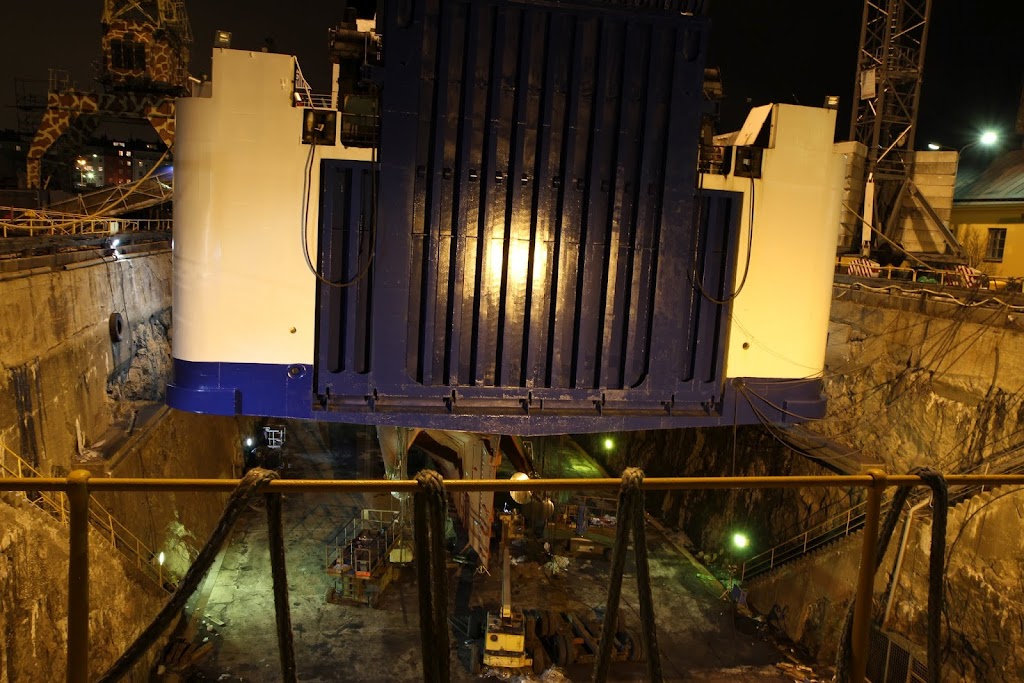 Standing on the small dock gate. There’s sea water just behind the camera, and a four-story deep workplace in front. 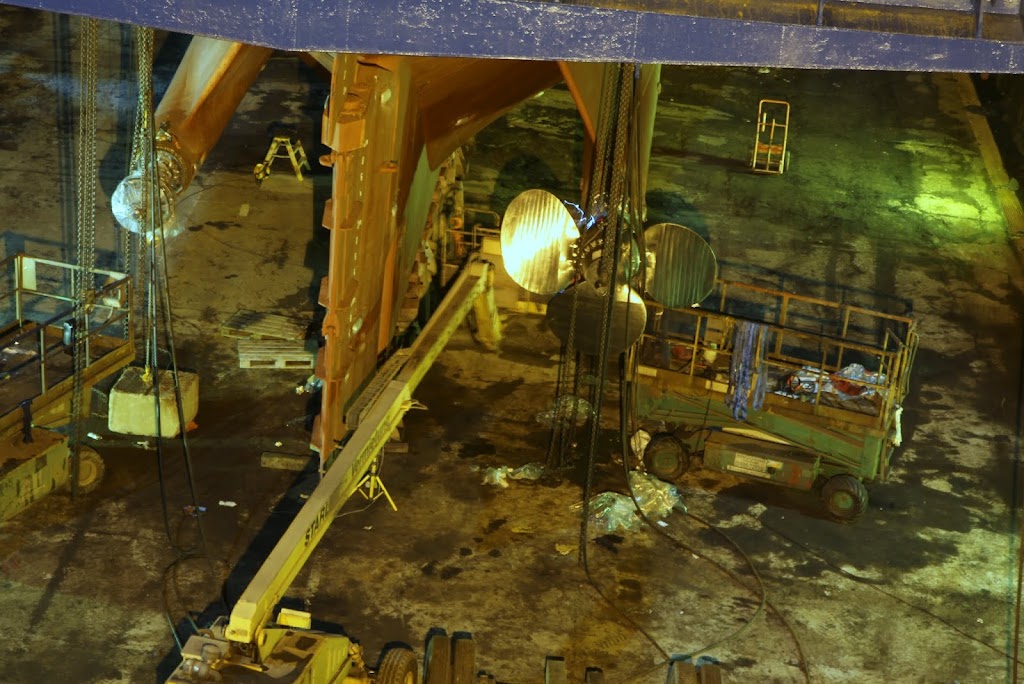 The water is constantly leaking in. For many decades, it was removed by a  steam engine pump, which unfortunately did not survive the test of time. It was then replaced by a diesel. 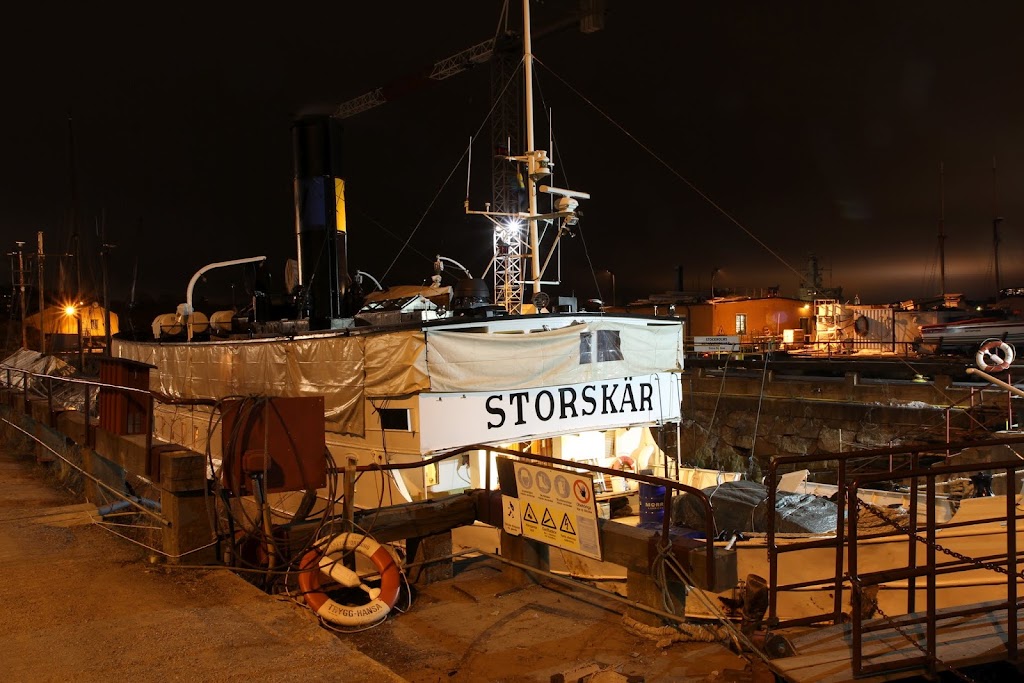 Another dock, another ship. Storskär is one of few remaining steam engine passenger ferries still in active service in Stockholm, it was built in 1908 and is the fastest steam boat in Stockholm. 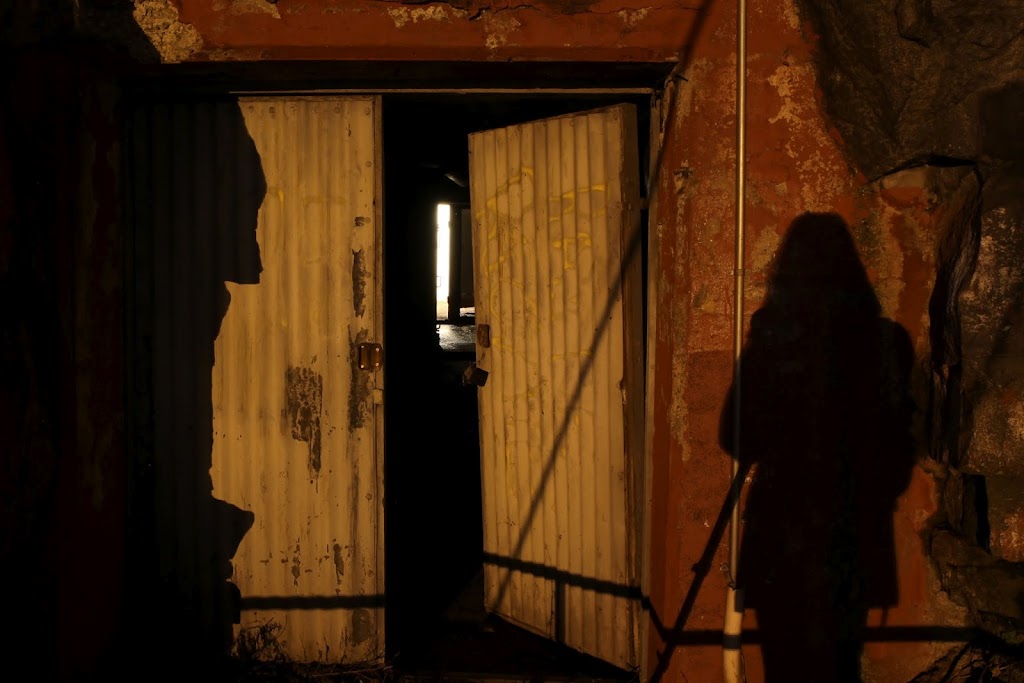 The Swedish Navy left a few bunkers and tunnels embedded in the granit rock. Most of them are unused and the security is lax to say the least. 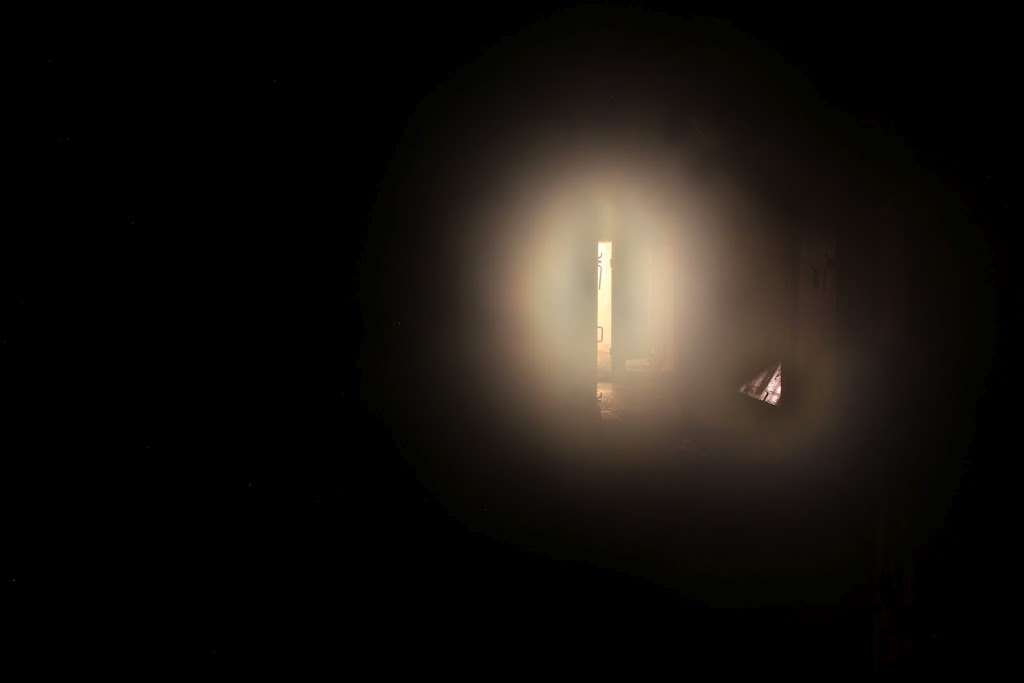 This particular bunker is hardly in use anymore. 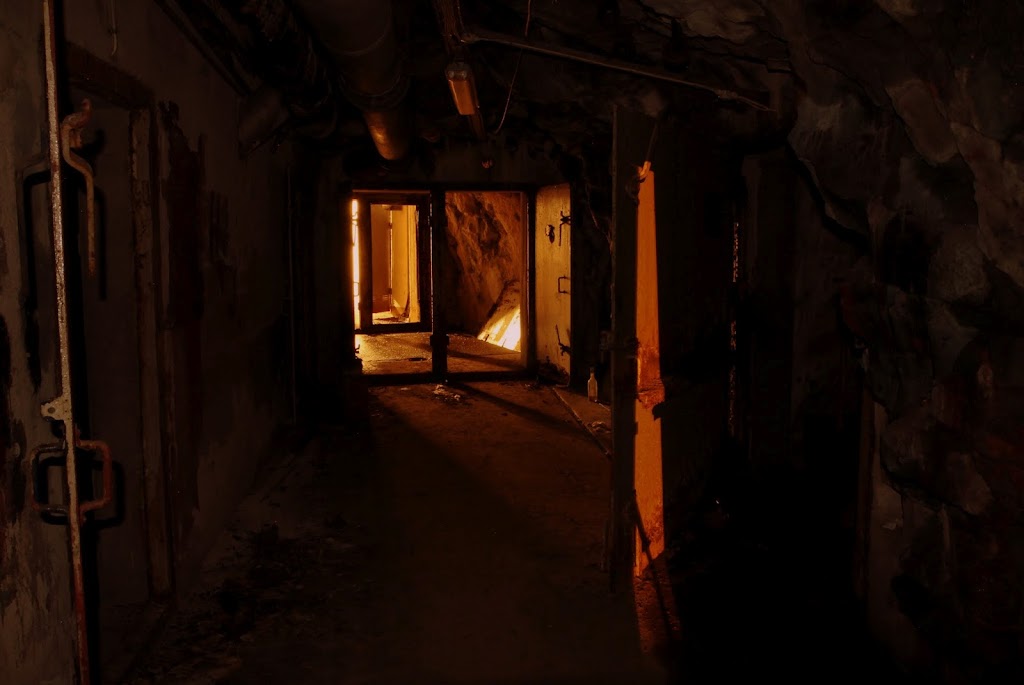 The navy abandoned it sometime in the 60:s. It was then used as a storage room for the famous Vasa ship museum. A lot of wooden ship details were stored here for conservation. They are now moved to Gothenburg. 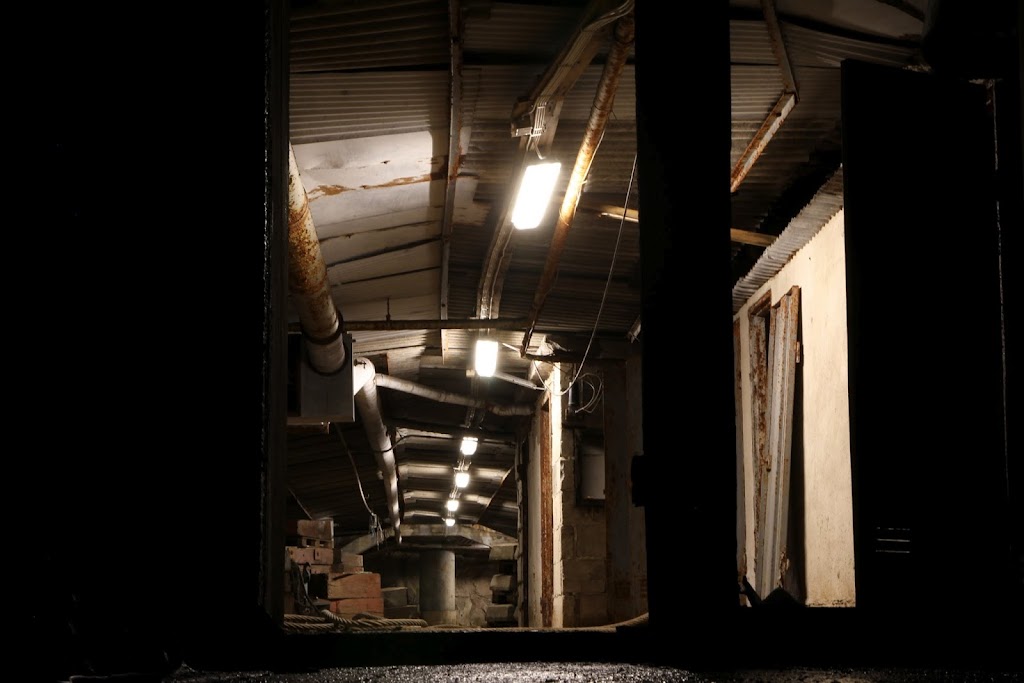 The tunnel currently serves as a damp and fairly expensive storage room.